The Thief of Wishes – Heroes

But what about the Thief? At the beginning, before the final concept of the “demonic raven”, we had a few other ideas. We knew from the start that we want Catharine (“The Girl”) and the Thief (“The Monster”) perform together as a duo. But the theme of the script was more comedic, with continuous escapes, gags and many attempts to take the stolen coins away from the Thief.

In the earlier versions of the script, the Thief resembles a ghost or a spirit. He was more humanoid, but possessed the power to change his shape. With time, however, we discovered that we would prefer a more serious story, which meant a more interesting Thief was necessary.

The current one also has magic powers. They are not, however, so comical. We also changed his motives – instead of acting out of greed or malice, he has become a more complex character, the prisoner of the Fountain, whose past is shrouded with mystery. 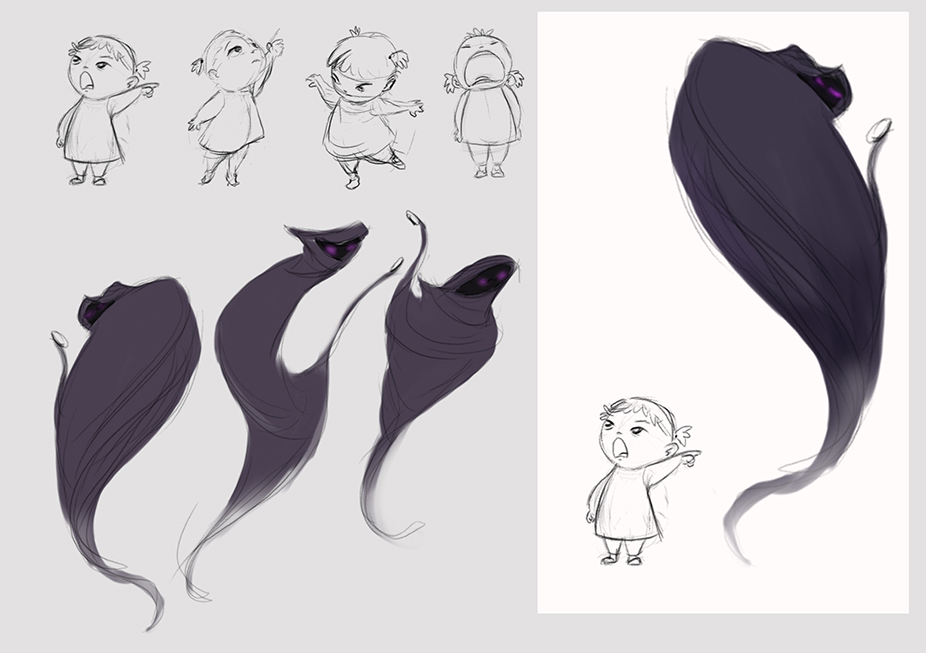 A villain, however, needs a hero. When Catharine entered the scene, she immediately found herself in the center of the story. Prudent, polite, but sometimes harsh, she is a protagonist who does not hesitate to take any challenge and outwit the Thief at his own game. Her sweet little face masks strong will and a steel logic.

Catharine is an involuntary guardian of public order who cannot stand senseless destruction. She wishes to protect dreams, but – above all – would deliver harsher penalties for people who don’t respect books. There is a significant probability she would become a policewoman after growing up – if, of course, someone dared to break the law in her town.